If we were to categorize your relationship with grooming as a Facebook status, it’s highly likely it would be considered ‘it’s complicated’. The good news about that is you aren’t alone; there are millions of men out there just like you. The bad news is that you’re probably making some huge grooming mistakes that leave you looking like a grizzly bear or smelling like a trash receptacle. Even the manliest men want to make sure they look and smell their best. It’s time to upgrade your relationship with grooming by avoiding these common traps.

When you were a teenager, it was cool to pile on the Axe body spray. The scent was so strong it easily masked your hormonal musk whether you’d taken a shower or not. But as a grown-up, it’s time to stop masking odors. By now, you should be on a regular shower schedule, so your fragrance of choice should be a pleasant surprise when people get close. Too often, men’s fragrance overpowers a space and lingers in the room long after they exit. You want to be remembered but not because your cologne sent everyone in a five-mile radius into a coughing fit. Tone it down with subtle colognes. Instead of 20 sprays, a few dabs on your neck and wrists will do.

If you’re not too keen on visiting the nearest threading salon for bi-weekly eyebrow maintenance, that’s okay. But it’s not acceptable to let those things grow uncontrollably. The only time a unibrow works in your favor is if you’re auditioning for a part in the next Sasha Baron Cohen film. Otherwise, you need to keep things under control. The key here is eliminating those random loose hairs that make your brows look unkempt. You don’t need to visit a stylist that transforms them into abstract art. Just clean them up a little.

Just a couple weeks ago, Cover Girl introduced a campaign featuring its first-ever (gasp) guy. That’s right-a man is now a spokesperson for one of the most famous makeup brands in the world. Odds are this seems strange to you because you still wash your face with bar soap and hope for the best. In the movies, the guys with wrinkles, scars and age spots are seen as the toughest. But guess what? Even those guys go through extensive skincare routines so they look good on the big screen. At the bare minimum, you should be cleansing your skin and moisturizing twice a day to reduce the negative effects of aging and encourage healthy skin cell production. 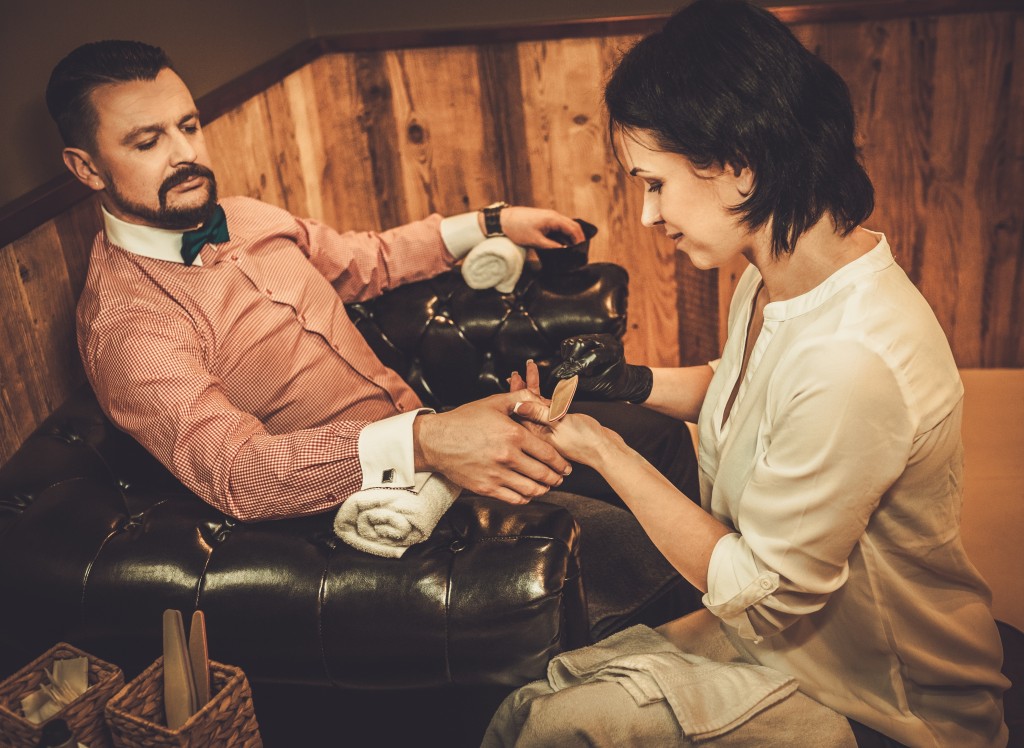 For some reason, men everywhere seem to have received a memo that cutting their nails was no longer a requirement. In every neighborhood, there’s a man with an extra-long pinky nail because he just doesn’t think it’s a big deal. Well, it is one of the bigger grooming mistakes. Long nails pack in dirt and bacteria, and they’re a major distraction to those around you. Keep them clipped and clean on a weekly basis for best results.

Sure, Burt Reynolds and Tom Selleck may have risen to fame in the ‘70s partly due to their furry chests and bear-like body hair. But that age has come and gone. You don’t necessarily need to go completely hairless like an underwear model. In fact, the only reason for hairless legs is a competitive advantage in the Olympic pool. But you should keep your body hair neat and trim. Cut your ear and nose hair on a regular basis, and get your excessive back hair waxed. Chest hair is okay but it shouldn’t be long enough to braid.

Guys mistakenly think they can go about their days with little to no grooming because it makes them more masculine. That couldn’t be further from the truth. It makes you smellier and messier but manlier-not so much. Address the five grooming mistakes above and you’ll find yourself on the right track.