The hype around the Rio Olympics has been constant, with all eyes constantly monitoring Olympic results. There have been many genuinely thrilling moments to celebrate from the U.S. Women’s Gymnastics Team winning gold to Michael Phelps’ historic 21st gold medal, equaling the 2168-year Olympic record set by Leonidas of Rhodes in 152 BC. There have also been moments that were cringe-worthy. Phelps’ rivalry with South African swimmer Chad le Clos inspired #PhelpsFace, and the men’s gymnastics team placed at a dismal fifth. Not to mention, who can forget the controversy about Rio itself-a local government in turmoil, dangerously high levels of bacteria on the beaches, thefts in the Olympic Village. There’s plenty to keep us busy dissecting this year’s Games, but what about the history of the Olympics? How did we get here?

The Olympic Games have literally been around ages. The first set of events dates back to 776 B.C. in Ancient Greece. They were held in honor of Zeus. In fact, for the Greeks, it was important to root the games in mythology and religion. The games started in Olympia, Greece, which was a sanctuary site for Greek deities near the towns of Elis and Pisa. The initial events served as an annual foot race in which young women competed for the position of priestess for the goddess Hera. A second race was created to determine who would participate in religious traditions at the temple.

Officially, the first written records of the ancient Olympic Games show that a cook named Coroebus won the 192-meter footrace called the stade. Coroebus of Elis is the first Olympic champion on record. However, many historians believe the games were in existence long before they were documented. 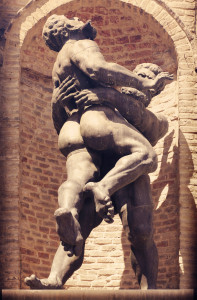 Over the next several thousand years, the games went through several changes, updates, and incarnations. They actually went on a steep decline until the flooding and earthquakes of 385 AD had passed. Between 776 BC and 393 AD, there weren’t any recorded instances of the Olympics on record. Once limited to just foot races, the games then began to evolve with the inclusion of the chariot race, discus, jumping,  running with armor, and pankration (a primitive form of MMA (UFC).

Olympic athletes had so much influence on society during that time that historians began to measure time by the four-year gaps between the games. These measures of time were called Olympiads.

The Modern History of the Olympics

The marathon, which is always a highlight of the Olympic games, was a modern event that wasn’t added until 1896. It started as a race from Marathon, a city northeast of Athens, to the Olympic Stadium. It was a total distance of 40 kilometers. 1896 was actually the first year of the modern version of the Olympics that we’ve come to know today. 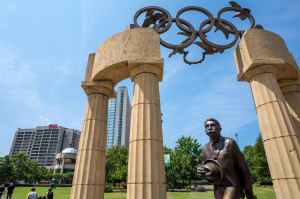 A Frenchman named Baron Pierre de Coubertin pitched the idea two years prior. He wanted to launch the new version of the games in Paris in 1900. However, his idea got his fellow delegates so excited they pushed for the games to start earlier and kick off in Athens. There, 280 athletes from 13 nations competed in a series of 43 events.

The Olympic Oath was instated in 1920; and in 1928, the Olympic torch was used for the first time at the Amsterdam games. Despite the existence of known torch relays in other Greek athletic festivals, the torch relay wasn’t introduced to the Olympics until the Berlin games in 1936.

The games have only been separated into summer and winter events since 1994. They returned to their Athens home for the first time in more than a century in 2004. The shotput competition that year was held at the same site as the ancient games of Olympia.

Though we’ve come to know the Olympics as a modern day display of international strength and athleticism, they aren’t just a current day source of entertainment. The Rio Olympics and all modern games before it serve as a reminder of international history.