As we were building our line of beard care products, we had an idea for a cool peppermint beard oil for sale for a limited time during holidays. The result, of course, was The Alchemist Tea Tree & Peppermint Beard Oil, which not only stuck around, but became a staple of our collection.

Why A Tea Tree and Peppermint Beard Oil?

There’s a lot to discuss with The Alchemist. For starters, the fact that it contains peppermint gives off a unique cooling sensation. It’s something that has to be experienced. Rubbing this oil into your beard and experiencing a cooling feeling that evokes the memory a cold breeze passing through your facial hair is incredibly refreshing. 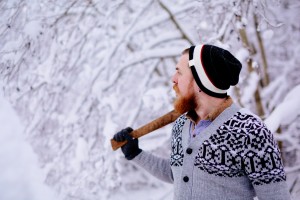 The cool feeling is reinforced by the wintery aroma of peppermint, which is usually associated with the holidays and snow because of its chilly smell. When you couple this with a light tea tree scent, it evokes the feeling of walking through the snowy outdoors in the midst of wintertime. Imagine freshly laid powder resting on the branches of the surrounding trees, this is it.

The Benefits of Peppermint

Peppermint essential oil is one of the most effective treatments for the skin and beard. This peppermint beard oil stimulates the scalp with its cooling effects, which posses the ability to improve circulation in the skin.

This powerful antiseptic can also help remove dandruff and prevent much-dreaded beard flakes. The cooling, stimulating, and moisturizing effects of this oil also relieve itching, a common problem associated with beard growth. Peppermint is specifically known for its ability to relieve itching and skin inflammation. Applying some peppermint oil to the skin can soothe any itch, it’s even shown to battle severe rashes, poison ivy, and sunburns. This oil is a common ingredient  in many high quality hair care products; it naturally thickens, repairs, and nourishes damaged hair. This natural moisturizer hydrates both the skin and beard, simultaneously.

The Benefits of Tea Tree Oil

Tea Tree oil is an effective treatment of the skin, one study found this essential oil as effective as benzoyl peroxide at treating acne, but without the associated negative side effects that many people experience including redness, dryness, and peeling skin. This natural oil is even effective against eczema and psoriasis. Tea tree moisturizes the skin underneath the beard, while removing toxins, and opening the pores for easy absorption into the skin.

Tea tree oil not only hydrates the skin, but moisturizes the hair as well. It increases blood flow that helps your follicles stay healthy. This strengthens your hair and stops premature hair loss. Like peppermint, tea tree oil also works to prevent dandruff and flaking associated with beard growth while preventing itching.

Why A Jojoba Base?

Jojoba is a vitamin-rich oil base that will help to keep the skin beneath the beard young and healthy by moisturizing and preventing signs of aging. It seals in moisture to protect the skin from free radicals.

Jojoba is particularly effective on beards because it prevents hair loss by helping the follicles grow new hair by unclogging them, allowing for faster, thicker growth. An anti-inflammatory oil, jojoba soothes the skin and reduces redness and itching. This potent oil is a powerful conditioner. Applying jojoba to the beard helps to shape it without weighing down the facial hair. This makes it more manageable and easy to comb through when styling.

The most commonly sought after benefit of beard oil products (which you will notice we’ve mentioned several times) is to prevent beard dandruff. Jojoba is naturally rich in zinc and selenium, common anti-dandruff ingredients found in many targeted shampoo treatments.